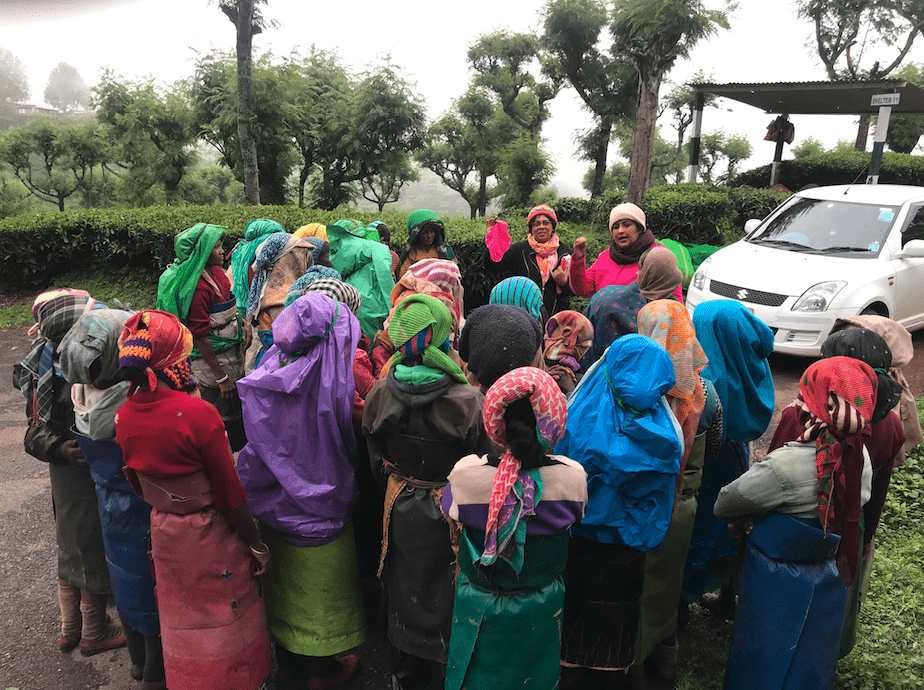 Women of the Nilgiris West Rotary Club in South India are having huge success with a solid waste reduction program that’s helping local and migrant workers save money, while enhancing local Fair Trade tea brands’ reputation with faraway consumers. The project is flourishing because Rotarians are paying close attention to the needs both of workers and of the firms who employ them.

“Tea here in the Western Ghats is harvested by (both local) migrants from the north,” explains ecologist Dr. Meenakshi (Mina) Venkataraman, an ESRAG board member and one of the Rotarians leading the project. The companies have set up schools and housing for them as these estates employ them throughout the year.

“But hygiene is a huge problem,” Mina adds. The workers, mainly women, put in eight-hour shifts on the mountain with chemical toilets far from any public sanitation or garbage collection systems. The women use disposable sanitary napkins, which are not only expensive, but also create a public health hazard whether they are burned (releasing dioxins), or whether they go into streams or dumps, where they become a source of infection. Dumps have increasingly caused problems as human populations expand into formerly remote areas in India, attracting wild animals who forage there for food and come into conflict with humans.

“As part of their Fair Trade certification, these growers have to demonstrate that they are using sustainable waste management,” Mina explains. “The tea companies have had real problems with temporary toilets, chemicals, and wild animals.” After researching several options, the Rotarians proposed that UNITEA use some of its CSR (Corporate Social Responsibility) budget to underwrite a project to introduce the women to SafepadsTM, which are reusable cloth pads with antimicrobial coating.

Made and distributed by the Danish-Indian partnership RealRelief, (realreliefway.com) a set of four Safepads costs less than $4 and can be re-used for up to four years. “These are convenient, look innocuous, and are easy to clean in just cold water,” Mina adds. The pads dry out quickly, even during the monsoon season.

Culturally, the Rotary women found, this option was more palatable than menstrual cups to the tea pluckers, who are already accustomed to using sanitary napkins. The Rotary team handed out Safepad sets to over 650 women workers in the plantations and explained how to use them. Mothers are the arbiters of what their families buy and use. Surveyed six months in, over 90% of the women continued to use their Safepads and were ready to buy sets for other members of their families.

Partnering with additional employers, the Nilgiris West Rotary team expanded the project to urban women, and have now reached over 2,000 women and girls in both rural and urban communities. “This is expanding really well through gossip circles,” Mina adds merrily. It’s because SafepadsTM fit families’ budgets and needs significantly better than the previous solution.

Some of the Fair Trade companies in the region foster women’s self-help groups as part of their corporate quest to demonstrate social responsibility. The Nilgiris West green menstruation initiative allows women to work all month and girls to attend school without the stigma they previously faced during their periods. Mina sees a real potential for self-help groups to start to produce these pads locally as a source of revenue.

A women’s empowerment project also enhances the reputation and customer appeal of the region’s Fair Trade tea companies vying to win the allegiance of faraway consumers. Another Rotary success in proving beneficial to all concerned!