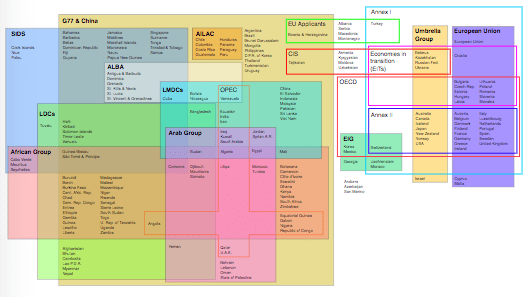 Week One of COP 24 Did Not End Well for Science or the Climate: If You Don’t Like the Science, Refuse to “Welcome” It.

Week One of COP 24 Did Not End Well

BOTTOM LINE: On Saturday night December 8, 2018, at the closing Plenary of the Subsidiary Body of Science and Technical Advice (SBSTA), the US, Saudi Arabia, Russia and Kuwait, refused to agree with the vast majority of the Parties to “welcome” the best science underpinning the need to keep warming to 1.5ºC. This was no mere quibble of whether to “welcome” or merely to “note” the Intergovernmental Panel on Climate Change (IPCC) Special Report 15 (SR15). The Report urgently calls to cap warming at only 1.5ºC, not the politically informed goal of 2.0ºC. This new lower limit means reducing carbon emission by nearly half by 2030 and achieving net zero by 2050.

The four disconcerting bedfellows, by insisting on the more lukewarm response, acted to obstruct progress to drastically reduce emissions in the hopes of halting warming at 1.5ºC. The US rejected the findings and conclusions underlying the Report.  Saudi Arabia, behaving like a blustering bully, ultimately threatened to reopen all matters previously agreed to in prior negotiations this past week. Kuwaiti and Russia supported the weakenng.

The majority of the nations persisted in their commitment to “welcome” the IPCC report, which had been requested under the Paris Agreement as part of the preparation for this COP. Ultimately, this impasse meant no consensus. Without consensus, under UNFCCC Procedural Rule 16, action on formally receiving SR15 will be deferred until SBSTA’s next meeting in June of 2019.

This dry procedural recitation fails to capture the emotions of angst, dismay and outrage that swept the room at this extremely unfortunate schism. Fossil fuel extractors attempted to hold the negotiations hostage – and mostly succeeded. Thus the important subsidiary body to the UNFCCC about all things science, tech and climate couldn’t even agree how to accept the very science report that it had commissioned.

I was so fascinated by the drama, tension of each speaker’s statement, (not to mention outrage at the posturing,) that I had missed the obvious.  A veteran member of the Austrian delegation was not so easily bamboozled: “Consensus is hard to reach, when failure is an option that will please the people back home.  If there is no desire for consensus, even the most gifted facilitator cannot achieve it.”

My goal here is to go beyond the news bites and offer a speaker-by- speaker review of the proceedings. I want to convey the mood and emotions of the Parties and Observers in the room as the US and Saudi Arabia derailed the wrap-up of SBSTA’s work, and cast a pall on the likelihood of success of the high level negotiations of the COP in Week 2. (I won’t know if you skip down to the next picture in the blog, to read about a moment of celebration.)

Saturday night at the Closing Plenary of the Subsidiary Body of Science and Technical Advice (SBSTA), proceedings hit an impasse. The task of this Plenary was to accept all of the language covering a multitude of topics that had been negotiated by technical parties during Week One. Many Agenda items were approved without discussion. For example, though I was personally dismayed, the Plenary accepted without comment that the parties had again failed to agree on how to deal with emission reductions for civil aviation and maritime transport, under item 11 of the Agenda.

As a novice observer, and ardent fan of the work of the IPCC, I did not foresee the gathering storm. After all, days earlier I had watched spellbound as the IPCC walked us through the details and dire warnings of SR15.  Surely, their conclusions would inspire the world leaders to focus and deliver.

The SBSTA Chair’s draft report welcomed nearly every other technical report within its purview. In paragraph 2, a whole slew of World Meteorological Organization (WMO) reports were welcomed, though in paragraph 1, IPCC’s statements were “noted” with appreciation. The impasse arose over this language:

“11. The SBSTA noted the IPCC Special Report on Global Warming of 1.5°C. [fn21] It welcomed the efforts of the IPCC experts on the report and the presentations given by IPCC experts and the rich dialogue that Parties and observers had with IPCC experts at the SBSTA–IPCC special event.     [fn22]. It noted the importance of the underlying research and systematic observation enabling the production of the report. It took note of the knowledge gaps and information needs related to systematic observation in the report.”

The majority wanted the SBSTA Chair’s acceptance of the report to be strengthened by changing “noted” to “welcomed”. Maldives, in its role as chair of the Association of Small Island States (AOSIS), proposed an amendment to upgrade the language to “welcomed,” expressing indignance that the SR15’s message of urgency was being ignored. Colombia, speaking for the Independent Alliance of Latin America and the Caribbean (AILAC) stated the report “needs to change how we work and live.” Korea, on behalf of the Environmental Integrity Work Group, stated the importance of SR 15 to the Parties’ obligation to ‘research and systematically observe’ under Item 6.

Ethiopia, on behalf of the 48 Least Developed Countries (LDCs), supported the amendment as did Costa Rica, noting the alarming gap between promised and actual reductions especially in light of what the IPCC stated was required. Norway, the EU, Belize joined in, as did Tuvalu, adding that the Report was a “wake-up call”. Jamaica would welcome the report, stating that any knowledge gaps were addressed by the various confidence levels of the IPCC’s conclusions. New Zealand supported the strengthening amendment as did Argentina, Nepal, the Marshall Islands, Switzerland, Chile, Mexico and Bhutan.

Saudi argued that the all of these nations were out of order for trying to amend “clean” text at this late date, given the lack of a formal objection.

Ruenna Haynes, a delegate from St Kitts and Nevis, challenged Saudi’s procedural maneuver, countering that if a formal objection were required, St Kitts and Nevis formally objected to the weaker language.  She eloquently urged: “This is not a choice between one word and another. We at the UNFCCC are now refusing to welcome the report that we requested. This is us, as the UNFCCC, being in a position to welcome a report that we requested. So, it seems to me that if there is anything ludicrous about the discussion that is taking place, it is that we in this body are not in a position to welcome the report.”

UNFCCC bodies work by ‘consensus’. Although this does not require unanimity, it does mean most nearly everyone must agree – with no one making a huge ruckus about not going along. (A scholar of the Public International Law of the UN would say it better – but I’m a newbie.) Consensus requires more agreement than a majority or even supermajority vote. Notwithstanding the ardent calls around the room to “welcome” the Report, the four nations’ desire to downgrade the acceptance of the report was enough to destroy consensus.

The Chair invited the disagreeing representatives to meet in a “small informal consultation.” Saudi objected to that, too, saying it couldn’t be in a plenary and a huddle at the same time. As the Saudis had multiple delegates, that seemed disingenuous to me.

Tuvalu called for the question to be put to the Plenary. The Chair hoped to avoid applying Procedural Rule 16, which would mean ‘gaveling’ the question off the agenda because of a failure of consensus and deferring action until its next session in June of 2019—Highly undesirable – such high stakes.

Saudi threatened to reopen all agenda items – not just the status of welcoming SR 15 – and observed that this was not a good signal for how smoothly the rest of the COP would run. But then, throughout these proceedings, the Saudis have offered nothing but nit-picking and obstruction, clearly not interested in progress toward reducing emissions or things running smoothly. (In an informal session, they proposed eliminating all references to gender equity.)

Tuvalu again pressed for a vote. In a last-ditch effort to avoid Rule 16, the Chair suspended the meeting, inviting parties to confer with him at the front of the Plenary room.

Larry and I waited and waited, along with hundreds of other observers, chatting amongst ourselves. We were appalled by what we had just witnessed.That’s when the Austrian diplomate observed that for some in the room, the failure of these talks would be a favorable outcome at home.

Finally, Larry and I went to find supper in the venue, ready to head ‘home’.  As we prepared to leave, however, the CCTV showed the Session had reconvened, so we raced back, to see whether the IPCC report would be received with the honor that it deserved.

The Chair acknowledged that there was no consensus on the text of paragraph 11, as quoted above, and so offered a compromise amendment. Up to this point, the Canadian Chair had run the meeting in French, relying on simultaneous translation. He asked the indulgence of the Plenary to work through the fine-tuned amendment in English, which even included moving footnotes. To the majority, this last-minute attempted compromise “to welcome the work and effort of the scientists, but merely “note” the Report” diluted the spirit of acceptance and appreciation. They rejected it.

The Chair had no choice but to apply Rule 16, which kicked the proverbial can down the road. The Chair allowed everyone who had wanted the amendment to speak again of their dismay and disappointment, even though the interpreters were nearing the end of their shift. He did commit to report to the President of the COP what transpired, with the hope that the Ministers might nevertheless be able to ‘welcome’ the IPCC Report on behalf of the COP.

Disappointment, frustration and outrage filled the room. Sadly, without consensus, under RULE 16, SBSTA would defer even dealing with how to acknowledge the IPCC report on “Best Science” until June 2019.

I don’t know how the failure to accept SR will impact how the Parties can refer to or rely on SR15 during the high level work of Week Two, but I’m trying to find out.

Marta Tipuici from the Manoki people of Brazil was one of the celebrants. Photo by Karen Kendrick-Hands

The mood recovered somewhat as the room greeted with applause the creation of Local Communities and Indigenous People Platform (LCIPP). This Platform has been developed to share indigenous knowledge and the special concerns of local communities and indigenous peoples who are most threatened by the onslaught of warming. The conclusion of a long journey, which began as a decision of the Paris Accords, with detailed directives from COP 22 in Marrakech, 2016, was greeted with a speech and singing.

But even this high note was tempered by sobering reality – funding the activities of the promised platform to share indigenous knowledge will cost  €950,000. Without additional donations, this brave new initiative will be a paper victory.
Rotary International is sending an observer delegate to the UNFCCC (The United Nations Framework Convention on Climate Change) climate talks in Poland, COP 24, the first time Rotary International will have a representative at this important world forum.