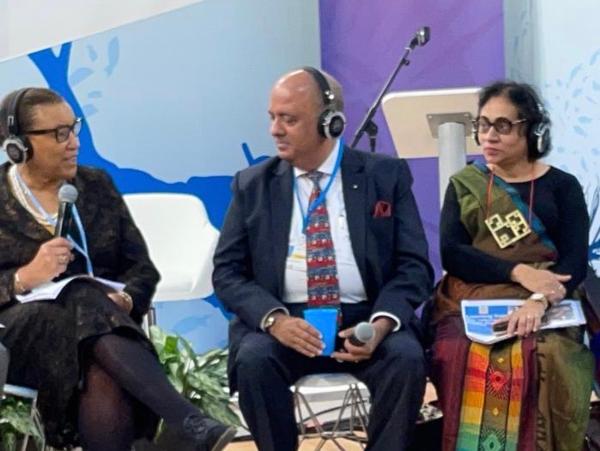 From the speakers we learned about the broad range of Nature-based solutions that mangrove restoration bring to the climate and biodiversity crisis.

In a speech Nov. 10 at the UN Climate Conference, Rotary International President Shekhar Mehta announced that mangrove restoration will be a central focus of Rotary’s environmental work in the year to come. “The impact of climate change is rising sea levels, tornadoes and cyclones, and the best and first defender of these in tropical coastal communities are the mangroves,” he said. He noted seeing first-hand the protection provided by mangroves from storm surges. In the aftermath of the 2004 tsunami in Sri Lanka, the areas buffered by mangroves suffered much less damage. He then went on to cite the loss of 30-50% of the world’s mangrove cover over the past 50 years. This Ecological Society of America review article explains the vital role of coastal wetlands – “blue carbon ecosystems” – in long-term carbon sequestration.

President Shekhar spoke at the beginning of the ministerial-level roundtable Nov. 10 at the Commonwealth Pavilion, after a warm welcome from Commonwealth Secretary General Baroness Patricia Scotland, QC, and ministers of the environment or forestry from the commonwealth nations of Sri Lanka, Bangladesh, Papua New Guinea, Kenya, Pakistan, Seychelles, Maldives, and Tanzania as well as the representatives from several global environmental organizations. Rotary of Great Britain and Ireland cited President Shekhar’s roundtable at COP26 as “the biggest showpiece event of his COVID-hit Presidential year so far.”

From the speakers we learned about the broad range of Nature-based solutions that mangrove restoration bring to the climate and biodiversity crisis: assisting with mitigation by sequestering up to 10 times more carbon dioxide than land-based trees; adaptation and resilience by stabilizing coast lines and buffering storm surges, managing sediment and reducing salination of farmland; supporting biodiversity by restoring habitat for shrimp, fish, and crabs, thereby also supporting local food systems and livelihoods.

Several spoke of the need to build capacity in local communities by providing alternate employment to replace destructive firewood cutting, shrimp farming and salt making. Examples of new careers are maintenance of the new plantations during the crucial six years as saplings take hold and beekeeping for honey and ecotourism. The Maldives representative reminded us of the need to educate the local communities that the benefits from mangrove preservation, restoration and ecosystem services outweigh the short-term gains from destruction for firewood or alternate land uses. We were cautioned that even the hardy mangrove could itself be put at risk as storms driven by climate change continue to intensify and as oceans became too saline, even for mangroves.

The opening for President Mehta’s roundtable featured ESRAG Director Vic Grosjean’s video on the mangrove restoration project of the Rotaract Club of Malindi, Kenya. Vic spent six months documenting mangrove work by Rotarians and Rotaractors in Australia, Nassau, Kenya, and Mauritius. His films were shown at the Pavilion in collaboration with the Blue Charter initiative through which all 54 Commonwealth nations agree to partner on environmental initiatives. You can see Vic’s Rotary mangrove videos online at Ocean Innovators.

Though the event could not be live-streamed because it was a high-level ministerial event, President Mehta’s roundtable at COP26 thrilled ESRAG members worldwide as evidence of Rotary’s determination to step into the breaches so painfully evident in major emitting nations’ failure to pay for the climate change damage they are causing.

As Rotary’s observer delegate representing ESRAG at President Mehta’s Roundtable, I suggested that eco-friendly stoves could be a promising strategy by reducing communities’ need to cut mangroves for cooking fuel. Our December newsletter will feature how ESRAG’s Cleaner Cookstoves Task Force can help you advance communities’ adoption of more fuel-efficient, cleaner-burning stoves, which also reduce exposure to smoke and harmful particulates.

Call to action for Rotarians, and how ESRAG equips it

RIP Shekhar closed the meeting with a strong call to action, outlining next steps including a follow-up for Roundtable participants, and a stocktaking of progress in one year. “There is the money and there is the hard work from Rotary to make this happen,” he told the delegates. “I know this is something which Rotarians would want to do. We will be hands-on.”

Thanks to RI President Shekhar Mehta and his commitment to climate solutions, Rotary’s mangrove initiative is well launched. Now we must build on the limited successes of COP 26, recently gaveled closed. Alas, the goal to ‘keep 1.5 alive’ did not advance as far as necessary to protect the most vulnerable and least responsible for the climate crisis. 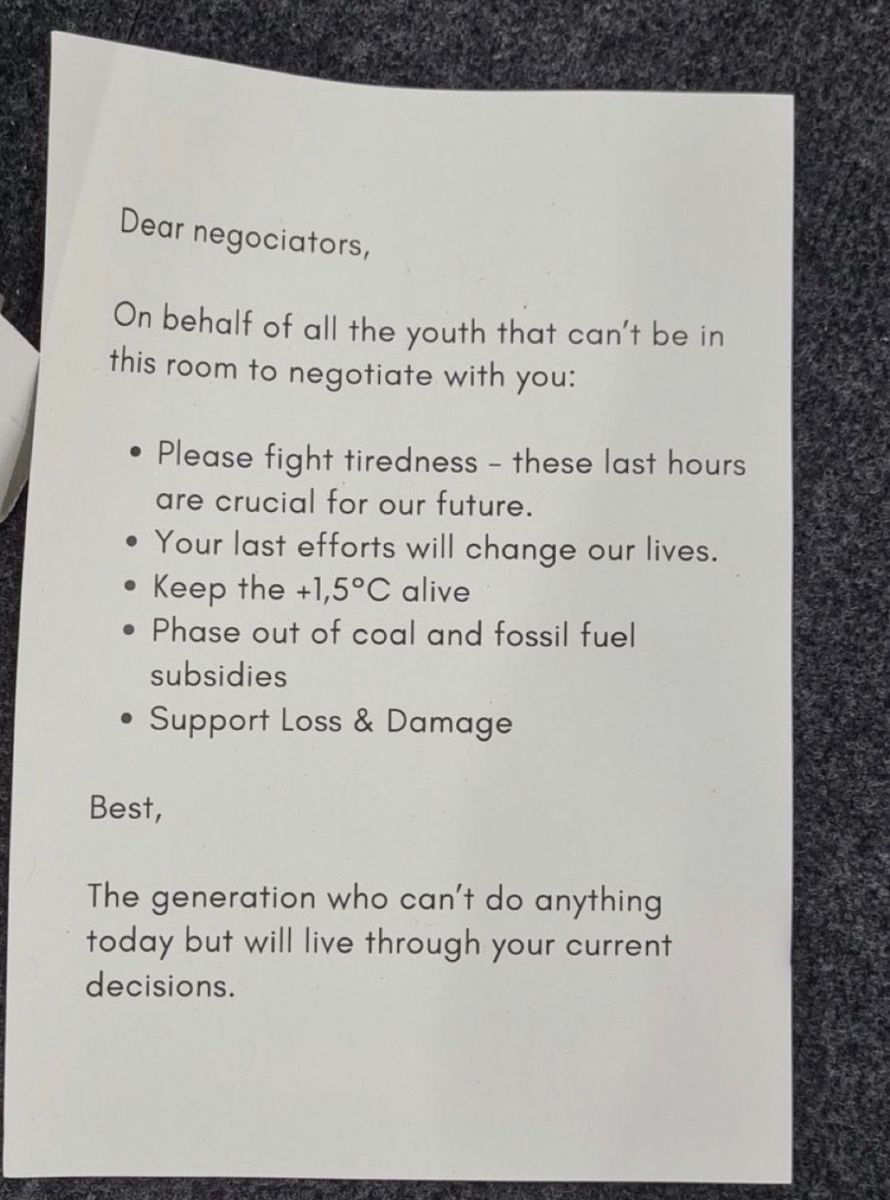 This letter was left outside the national delegation offices at COP26 in the final hours. We Rotarians are challenged to push for more than the bare minimum. Now is our opportunity to assess how we work in our communities and with our governments to enhance ambition, ensure that national plans for NDCs (Nationally Determined Contributions) are strong and filed timely, to encourage strengthened commitment to mitigate where we can, and to adapt and build resilience where mitigation will not come in time.

It’s crucial for Rotarians to support the rapid phase-out of coal and elimination of fossil fuel subsidies. We can encourage faster and more robust action than the minimum promises that were able to garner consensus from nearly 200 nations. We must leverage the ethical and moral power of our Four-Way Test to help developed countries to:

Kudos to Judith Diment, MBE, Dean of the Rotary Representative Network, and Doug Wills, RI Representative to the Commonwealth, for investing their time, skills, and resources in creating the November 10 Roundtable with RI President Mehta at the Commonwealth Pavilion. It was an extremely well-received and successful event. They have ushered in a new era in Rotary’s engagement to protect the environment and to serve to change lives.

The calamitous impacts of climate change on tropical islands and coastal communities – and its disproportionate burden on women and people of color – make Baroness Patricia Scotland an especially timely leader for the Commonwealth. Born in Dominica in the Caribbean, she was the first black woman to be appointed Queen’s Counsel (QC) and the youngest woman ever to appointed as a QC. Her incredibly distinguished legal career includes being appointed in 2007 as the UK’s first woman Attorney General since the role was created in 1315.