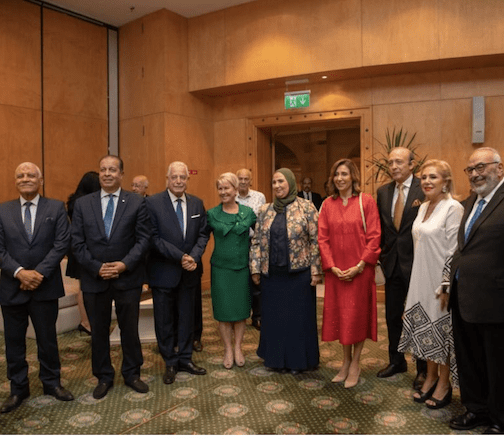 President Jennifer did 7 television interviews during her three days at COP2.

Chris Puttock’s daily report from Week One of COP 27

Day 1, Monday, Nov. 7: President Jennifer attended the COP27 Opening Ceremony with 150 Heads of State. There are 10,000 NGOs at COP27 but only 30 NGO delegates were invited to the opening ceremony.

At 7:30 pm, Jennifer Jones spoke at Rotary’s Nature-Based Solutions: Mangroves and Beyond Side Event in the Blue Zone, enabled by Paul Desenkar of UNFCC.  A number of governmental and non-governmental organizations and people were engaged in our meeting, giving us new connections for the mangrove projects, and planning ideas for COP28 in the Arab Emirates. It was particularly a very good time to catch up with friends from last year’s COP. I also pitched Rotary’s Adopt-a-River collaboration with the UN Environment Programme and ESRAG’s Pollinators initiative.

Day 2:  The entire Rotary delegation visited the mangroves at the southern end of Nabq National Park to scope out the mangrove project. Security was intense with three checkpoints in just a few kilometres, as the distance to Saudi Arabia is c.20 kms across the Gulf of Aqabi. We considered fostering a mangrove project that could enhance the livelihoods of the Bedouin people living at Nabq. In the afternoon we created a global grant template for the project with the RC Sharm el-Sheikh and gathered the names of host members and international partners, each bringing that day $15,000-20,000. This indicated keen and immediate interest in restoring mangroves and working with the Bedouin people to manage a plant nursery on the seashore. The first nursery will need about 20,000 seedlings per year. When these plants grow to about one metre, they will be out planted into restoration sites in Nabq.

In the Blue Zone President Jennifer was interviewed by Egypt TV.

The evening Presidential reception with Jennifer as host was a raging success, attended by more than 60 delegates including the Governor of South Sinai, many federal government, and local dignitaries. Three Egypt Government Ministers attended: Minister of Culture Nivine Youssef Mohamed Al-Kilany, Minister of Youth Ashraf Sobhy and The Minister for Social Solidarity Nivine El-Kabbag who announced in her speech that she would have her agency donate $50,000 to the Nabq mangrove project. So, within two days we had funded a mangrove project for Egypt with more than $100,000.

Day 3: Wednesday November 9: On Wednesday morning Jennifer, Judith, Mohamed, and I networked with many booths in the Blue Zone, including the Canadian, British, and other state booths.  President Jennifer was interviewed by NO TV Egypt. We met the Global Communications Director of the worldwide business consulting firm CGI and Judith agreed to meet with her in London to discuss CSR (corporate social responsibility) opportunities. We then transferred by our van for the afternoon at the green zone. Traffic was as usual abominable but led to fruitful conversations in the van about COP 27 and projects.

On Wednesday afternoon Jennifer, Judith, Mohamad, Keith, and I were the panelists for Nature-based Solutions: Egypt. Over 100 delegates attended. There, the Egyptian delegation showed a video showcasing a dozen nature-based solution from clubs around Egypt. Our Rotary COP delegation presented the mangrove projects and more. I took several minutes to talk about ESRAG and the need to collect data through iRotree. Reem Abdel Meguid and Jennifer announced the RC Sharm el-Sheikh global grant of $100,000+ , and how Rotary – People of Action – can get things done in hours and days. We are now also scoping out a new project on the west side of the Red Sea at El-Gouna with the Egyptian delegation, who have been fantastic. Between everything, we visited with questions and answers, for the best part of an hour, then had a cup of coffee/tea before exploring the Green Zone till 10:00pm or later.

Day 4 Thursday November 10. Our Sharm el-Sheikh leader for the mangrove project, Club Secretary Saro Sarah Salal, arrived at 8:00 am. We then all said fond farewell to Jennifer Jones, who was travelling to Cyprus. An hour later Mohamed Delawar left to travel back to Cairo.

Judith, Terrell, and I were accompanied by Saro and a security guard to go to Ras Muhammad. Ras Muhammad is a national park at the southern extreme of the Sinai Peninsula, overlooking the Gulf of Suez on the west and the Gulf of Aqaba to the east. It has a location called The Mangroves. Nearby is a favorite diving site with hundreds of visitors a day. The trip was very informative to Saro, who is heading up the Mangrove Project for Sharm. She and I will have a meeting each morning to work on her club’s Global Grant proposal until I leave.

Judith, Terrell, Saro, and I went to the Green Zone for a program that emphasized the role of women and youth in climate change. H.E. Dr. Maya Morsy, President of National Council for Women Egypt, spoke about the important role of women in Africa, as they produce 70 percent of agricultural crops. Rotarian Dr. Mayan Rashan talked of the millions of young people who are affected by climate change—some studies show 90 percent of youth don’t know or understand the nature of the problem. Ms. Sanarya Al-Saffar spoke of her experience in Sweden. Eng. Motaz spoke with feeling about the need to engage young people, as they are the heart of the action and need money and encouragement to find environmental solutions and start a new green change movement to replace those people not changing. There we met with Canada’s Ambassador to Egypt.

Judith Diment and I attended a Commonwealth event on Intergenerational Dialogue on the impact of climate change with Commonwealth Secretary General Baroness Scotland and the Maldives Environment Minister.

Day 5: Friday November 11: Judith and I visited the Bahrain booth. They have a goal to quadruple the number of mangroves in Bahrain by 2035 based on areas that were new to me and not close to the Rotary club that we are working with, but not unexpected. They are planning nurseries to grow one million seedlings per year, from their current 10,000.

Judith and I visited and listened to a presentation on civil society interventions then met with people from the Civil Society booth, including Prof. Salah Elhaggar and Professor Sherine Fahmy, American University Cairo, and others. These folk are now coming to the mangrove research center, being opened in Sharm el-Sheikh in the next few days. Judith attended the keynote address by President Joe Biden, he urged world leaders to accelerate programs to reduce CO2 emissions.

Judith, Terrell, and I attended the COP27 Cultural Evening at the stunning new Sharm el Sheikh Museum. Groups of indigenous people gave moving presentations on the need for sustainable policies to protect their future. Andrew Potts, Coordinator of ICOMOS Climate Change and Heritage Working Group, also spoke. I met Andrew for the first time on the flight from Istanbul to Sharm el-Sheikh, just a chance meeting for two people from Maryland perhaps rekindling memories of Rotary.