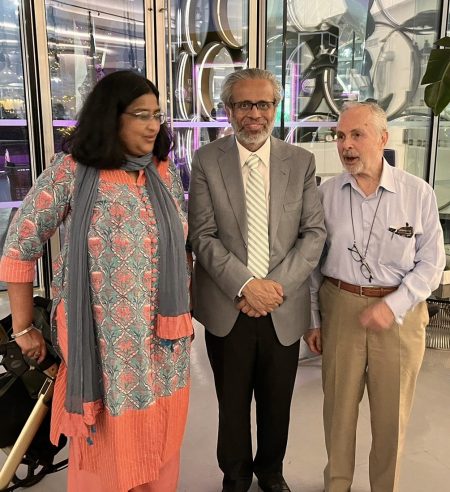 Dedicated to “Climate Stability Through Environmental Sustainability,” Rotary’s Institute for Zones 1b, 9 and 10 took place 2-4 December at Abu Dhabi. This Institute put the spotlight on urgent environmental issues and effective responses for close to a thousand Rotarians representing 42 nations, from Pakistan to Taiwan to Indonesia. ESRAG Projects Director Mina Venkataraman and I attended upon the invitation of RI Director M. Faiz Kidwai – we’re shown together in the picture here. RID Faiz, whose home in Karachi is at the epicenter of Pakistan’s catastrophic 2022 floods, served as the Institute’s convener. He is an ESRAG member and was Regional Chapter Co-Chair with me before being elected to the RI Board.

In addition, RID Frederick Lin gave an exciting talk about District 3520’s highly effective Save Food for Taiwan Association.  D3520 joined forces with four other districts to win a Rotary global grant to build a commercial kitchen to divert food from the landfill and provide culinary training to unemployed people. Between its inception five years ago and May of this year, the project has saved over 59,000 kg of food and delivered almost 200,000 lunches to low-income people across Taipei, thus reducing both greenhouse gas emissions and hunger.

There were two important gains from our attending the Abu Dhabi Zone Institute as  ESRAG representatives . The first is that we connected with several senior Rotarians, including DG’s, DGEs, and DGNs from Pakistan, The Philippines, Bangladesh, and Malaysia. We introduced them to ESRAG, and had the opportunity to tell them why the environment is important and what they can do. That has already started bearing fruit: Mina and Rotarians from Indonesia have established a WhatsApp group and are discussing a mangrove global grant project.

The second gain is that the RI Directors, RIPN Stephanie and PRIP Ravindran gave positive feedback in my interactions with them. This is encouraging news for ESRAG and the environment. We can be more effective in our future work.  Starting next year, ESRAG must have a presence at all Zone Institutes, help them organize at least one environmental session, and ensure that at least one of the speakers represents ESRAG.