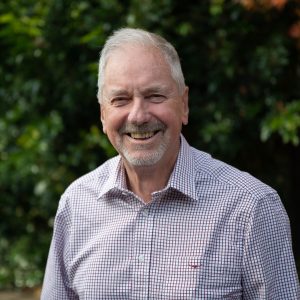 David Brawn has worked in leadership roles in large corporations including the Rank Organisation in the UK (consumer electronics), Xerox in the UK and Australia (office technologies) and Telstra in Australia (telecommunications). His main areas of expertise include marketing, strategic planning, and business management. He was the CEO of a Telstra subsidiary when he retired in 2005.

David is well qualified academically with a BSc in Physics and Maths from London University, an MSc in Business Studies from London Business School, and a GAICD Diploma from the Australian Institute of Company Directors covering corporate governance. Of particular relevance to his role as an ESRAG director is his Graduate Diploma and MSc in Environmental Science from Murdoch University.

David joined Sydney CBD Rotary Club in 1999, became President in 2003 - 4 and was District Governor in D9675 in 2010 - 11. He is now a member of Berry Rotary Club in a small town 2 hours south of Sydney. Since March 2021, he has led the D9705 Environmental Envoy Program, with Envoys encouraging clubs to embrace the new Environmental Area of Focus.

Outside of Rotary, David was Chairman of Spinal Cord Injuries Australia (2007 - 13), a volunteer guide at the Australian Natural History Museum in Sydney and a member of Repower Shoalhaven’s Solar Farm Committee (launching a 3 MW solar farm in December 2021). He is a member of the Berry Forum Community Committee and Shoalhaven City Council’s Northern Flood Plain Risk Management Committee.