Energy Justice for the Virgin Islands 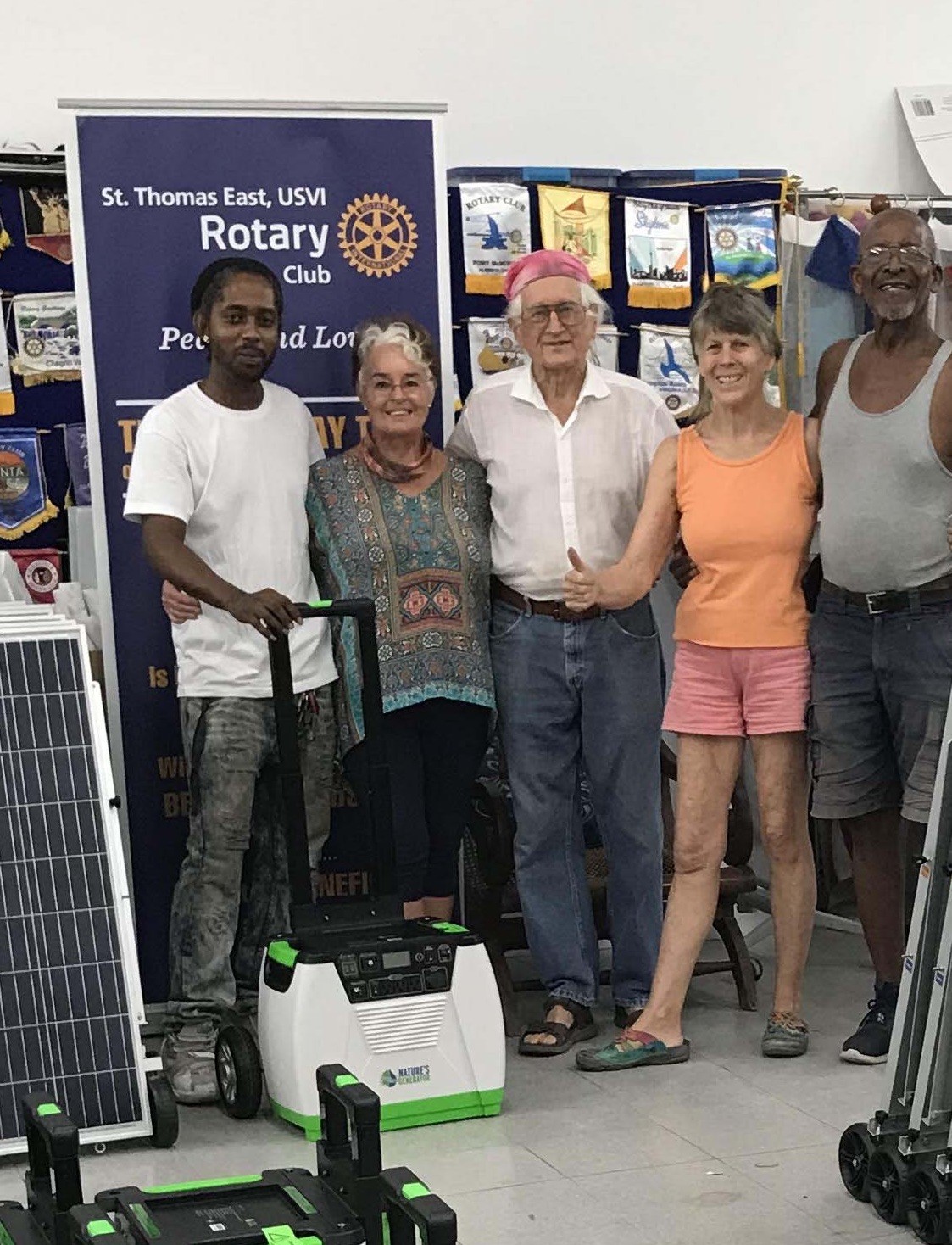 Energy Justice for the Virgin Islands

Battered by increasingly savage hurricanes since Hugo in 1989, communities on the Caribbean island of St. Thomas also endure several blackouts a month at the mercy of a badly-managed grid. Many people here are low- or moderate-income (LMI), but they are forced to pay residential electric rates more than three times the U.S. average. Doug White, Co-Chair of ESRAG’s Climate Solutions Task Force, is mobilizing his knowledge and networks to help relieve the energy burden and increase the resilience of the U.S. Virgin Islands. Working through his Rotary club, the Solarize St. Thomas “Share the Sun” program is making solar power affordable to LMI households including renters. The technical and financial pieces of this campaign can be applied in other tropical regions facing severe storms and unreliable grids.

The Rotary Club of St. Thomas East Eco has coordinated a robust partnership called the Coalition for Solar Affordability to reduce the immense financial hurdles that prevent households and businesses from going solar. Green architect Doug White, “retired” at age 78, is leading this quest, mobilizing business, non-profit, university, and philanthropic resources on and beyond the island.

In September, 2021, Solarize St. Thomas’ Share the Sun campaign delivered the first 20 portable solar-powered generators to residents of Savan, a historic community where freed slaves built their homes in the mid-19th century, but which is now one of the poorest neighborhoods on the island.

The portable generators include battery storage: without it, they shut down when the grid goes down. They will mitigate multiple hardships faced by low-income families. St. Thomas’ Water and Power Authority (WAPA) has blackouts averaging three days a month, not only depriving families of power but adding the financial loss of spoiled food. Stored electricity in the generators, which have three plugs, will power a few hours of refrigeration as well as running a light, a fan, or recharging a phone. While the grid is down, solar power generated by the PV panel recharges the battery in the units.

“Distributed solar makes the whole grid more stable,” says White. “There’s no reason why we can’t be 100% renewable, but we’re only at 15% now, way behind schedule. The government invested in back-up generators for WAPA that run on propane, and only has a three-day supply of fuel because it doesn’t pay its bills.”

But the capital cost of solar is a huge barrier to private citizens. “85% of the residents of the Virgin Islands are people of color,” White says. “Solar is looked on as a rich person’s privilege.” White wants everyone to have solar power! He teamed up with fellow Rotarians to raise money, knock down costs, and get help directly to financially-strapped households and businesses. Technical assistance is equally important.

Here are the resources St. Thomas East Eco brought together to build the Coalition for Solar Affordability:

Three Coalition leaders belong to St. Thomas East Eco Club – some recruited as Rotarians by Doug White. They bring multidisciplinary skills to their passion for increasing their community’s resilience and energy justice.

The Coalition reviewed solar installers and chose a reputable firm. CAN reviews applications from households to determine those income-qualified for the program. LMI households pay 15% and Solarize St. Thomas’s, Share the Sun uses grants and donations to pay 85%. For the portable solar generators, the family share is only $150-$350.

Banks on the island refuse to lend money to low-income homeowners for solar, but the funders allocated $100,000 for rooftop solar for people in this situation, making them eligible for the 26% federal tax credit. Households’ co-payments are coming in, replenishing the fund so it can be used for others. Solar Crowdsource’s group purchasing discounts reduce the capital cost to all partners.

The Coalition is also equipping businesses. “At 45¢ per kWh, electric rates on the Virgin Islands are the highest in the United States,” says White. “I have friends who’ve gone out of business because they can’t pay their utility bills.”

Doug White and the ESRAG Renewable Energy Task Force Co-Chair Aur Beck are also working with the Caribbean Green Technology Center at the University of the Virgin Islands to create a green jobs program to equip workers to make the transition from repairing diesel and propane generators to careers in renewable energy.

Rotary Clubs can replicate this partnership strategy with island or coastal communities in any region subject to severe tropical storms.

As an environmentally-focused architect, White was seen as eccentric when he put rooftop solar on his home (where he also had his office) in the 1990’s after Hurricane Hugo devastated the island in 1989, the first of several category 4 and 5 storms over the last 30 years. “After Hurricane Hugo, we had no power for six weeks, so I said that is not going to happen to me again! That is when I decided to install solar.” White recalls. “After the last two category 5 storms, Irma and Maria in 2017, we went without power for three and a half months, but our solar power system carried us through. Each one of these storms changes your life.”

Irma had sustained winds of over 200 mph, with gusts over 300. Flying debris is a huge danger. Seeing a lot of unsafe practices as the community rebuilt, White wrote Design Guidelines for Hurricane Resistant Buildings. When people ask if rooftop arrays are vulnerable, this experienced architect explains, “it’s all in the attachment. Since the 1990’s I’ve only lost one solar panel in three category 5 storms. Solar panels actually make the roof stronger if attached right.”

Before the hurricanes,” Doug adds with a laugh, “people used to criticize me for overbuilding. They don’t anymore!”

To find out more about the details of how Solarize St. Thomas’ Share the Sun works, or to participate in the solar Global Grant project, email Doug White