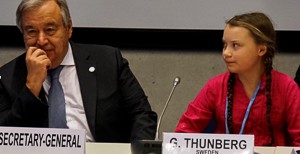 UN Secretary General António Guterres seated next to 15-year-old Swedish climate activist Greta Thunberg, who explained that while the world consumes an estimated 100 million barrels of oil each day, “there are no politics to change that. There are no politics to keep that oil in the ground. So we can longer save the world by playing by the rules, because the rules have to be changed.”

Greta Thunberg is an articulate, resolute and earnest teen who wears her hair in braids. Greta’s action to address climate change was to strike from school every Friday and sit on the steps of the Swedish Parliament.

Greta speaks truth to power, in a compelling straightforward way.

We ignore the truth she speaks at the peril of our grandchildren and their civilization. In 2078, when Greta is 75, I will not be here to see whether we humans have managed to pull out of the death spiral of climate change.  I hope that Greta will be.

Read her call to her action delivered at a Plenary Session at COP 24 in Katowice, Poland:

“My name is Greta Thunberg, I am 15 years old and I’m from Sweden. I speak on behalf of Climate Justice Now.

Many people say that Sweden is just a small country and it doesn’t matter what we do. But I’ve learnt that no one is too small to make a difference. And if a few children can get headlines all over the world just by not going to school – then imagine what we all could do together if we really wanted to.

But to do that we have to speak clearly. No matter how uncomfortable that may be. You only speak of green eternal economic growth because you are too scared of being unpopular. You only talk about moving forward with the same bad ideas that got us in to this mess. Even when the only sensible thing to do is to pull the emergency break.

You are not mature enough to tell it like it is. Even that burden you leave to your children. But I don’t care about being popular, I care about climate justice and the living planet.

Our civilisation is being sacrificed for the opportunity of a very small number of people to continue to make enormous amounts of money. Our biosphere is being sacrificed so that rich people in countries like mine can live in luxury. It is the sufferings of the many which pay for the luxuries of the few.

Until you start focusing on what needs to be done rather than what is politically possible there’s no hope. We can not solve a crisis without treating it as a crisis. We need to keep the fossil fuels in the ground and we need to focus on equity.

And if solutions within this system are so impossible to find than maybe we should change the system itself?

We have not come here to beg world leaders to care. You have ignored us in the past and you will ignore us again. You’ve run out of excuses and we’re running out of time. We’ve come here to let you know that change is coming whether you like it or not. The real power belongs to the people.”

High Level Segment statement of Greta Thunberg, on behalf of the Environmental Non-Governmental Organizations (ENGO) Constituency. Her message is even more powerful when you watch the video.

I saw Greta as we both attended COP24 in Katowice, Poland. She was usually accompanied by her father, Svante Thunberg, hurrying from one event to the next in the sprawling, maze-like, temporary complex. I was reluctant to approach her directly, as I thought there was little I could do or say to add to her mission of persuading the adults who are empowered to take climate action to do so, and I didn’t want to interfere with her focus.

I did, however, have a fleeting conversation with her father about the gift of children who are advocates, because I felt we had that in common.  At about Greta’s age, my younger son became a fiercely outspoken advocate for public transit in Detroit, Michigan, once the epicenter of the auto industry.  While not quite as big a challenge as persuading those in power to act on climate change, still, tackling mobility inequity is a big undertaking for someone too young to drive, let alone, vote.  Stephen had tasted the independence that transit offered him in Paris and other urban centers, and vowed to make transit better at home, because “If Detroit had better transit, it would be a better city.” His naivete and purity of vision allowed him to see and act when many adults were resigned to transit poverty in Motown.

So, during a hurried a lunch break, I fell into step with Greta’s father and offered him my business card, which stated my role in Katowice as the observer for Rotary International, as I thanked him for his daughter’s vision and advocacy, and his role in nurturing it.  He scanned the business card, and as he popped it into his pocket he commented, “Rotary? I was a Rotary exchange student.”

Thus, I had a second connection with Greta and her advocacy. Greta’s father and I shared the life-changing experience, and gift from Rotary – of the Rotary Youth Exchange program.

Then it struck me – the gift of Rotary Youth Exchange is multi-generational with much broader influence than we often recognize. The exchange year, the prep before and the follow-up afterwards, and the lifelong credential are all gifts to the student who travels to another country to study and live with several families for a year of high school. Those students fortunate enough to participate are imbued with Rotarian values of service above self and the Four Way Test for their lifetime. The families who host them benefit by creating international connections that continue to the next generation: I have attended two weddings in foreign countries and greeted ten international “grandchildren.”

Of course, my information is anecdotal, but from my sample size of two, I cheerfully speculate that when exchange students step into the role of parents, we carry the values of our exchange year with us through life. And as parents. we may be blessed with the opportunity to nurture advocates like Greta and Stephen who become advocates for the planet, the social community, truth, justice and equity.

First, be moved by the power, purity and singularity of Greta’s vision. Then, ponder with gratitude the impact of Rotary Youth Exchange (RYE), which serves over 8,500 high school students to live and study abroad each year in 113 countries. Over 80% of districts participate, and have engaged with over 143,000 students since record keeping began in the late 90’s. I’m an engaged Rotarian today, because I had the privilege and honor of being outbound to the RC of Port Adelaide, South Australia 51 years ago.

Next time you are invited to host an exchange student, contribute to a winter clothing fund for a student from the tropics blindsided by winter in the northern hemisphere, transport a student to a school or RYE event, or provide a special outing, say yes. You’ll be contributing to the benefits conferred by RYE now, and for future generations, and you will be enriched as well.

This is Blog Post 7 in a continuing series.  Published January 19, 2019. To read the earlier archived blogs beginning with Dec.1, go to ESRAG Archives .From there you can also subscribe to the newsletter of the Environmental Sustainability Rotarian Action Group from our home page. If you are a member of the Rotary Family, please support our work by joining ESRAG, today!

← Week One of COP 24 Did Not End Well, Blog 5 Packing my Bags and Unpacking the Katowice COP →