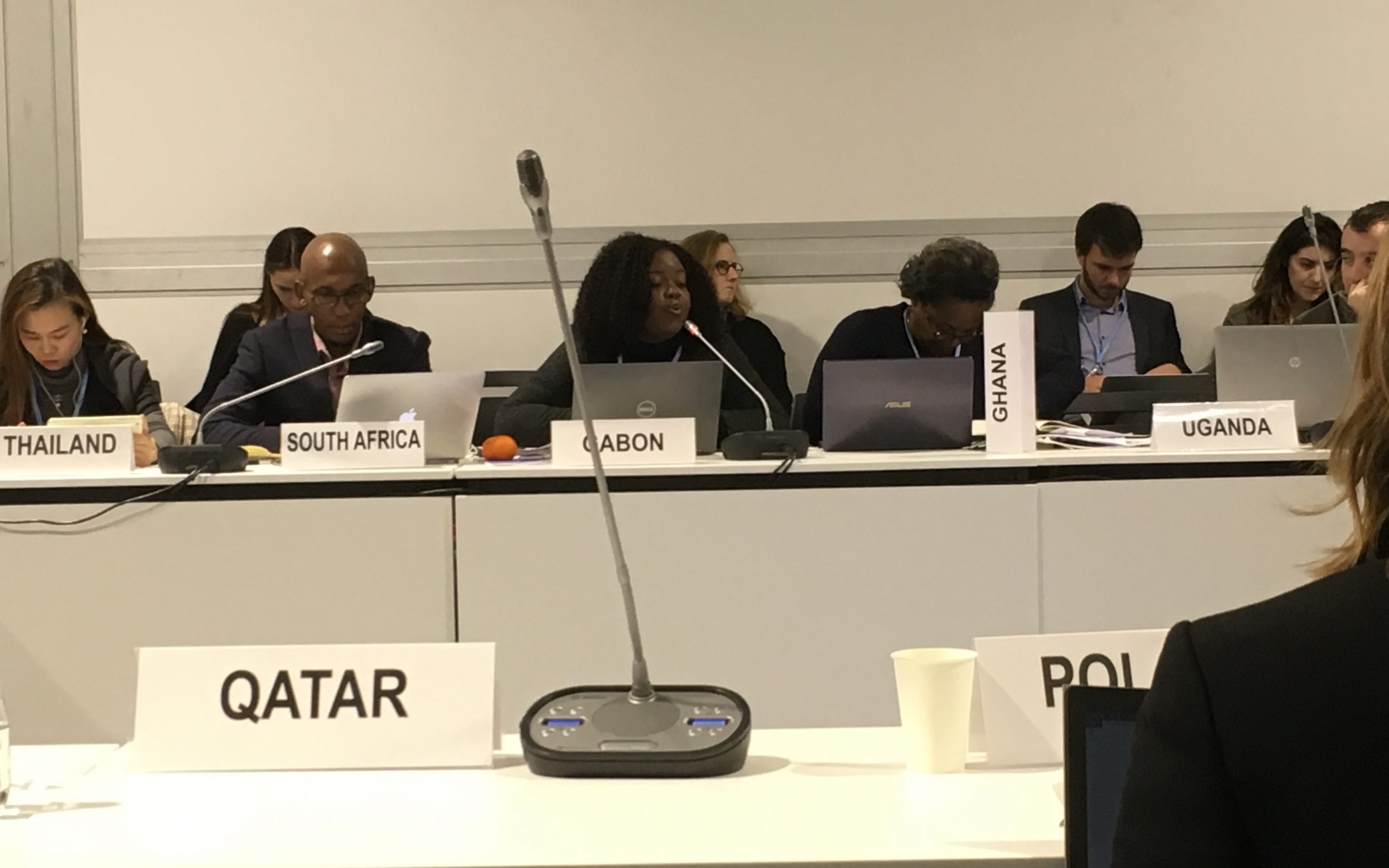 On Monday December 4, 2018, with first-day-of-school jitters, Larry and I re-crossed streetcar tracks several times before we found the Main entrance to the COP24 complex, passed security and traded our paper credentials for photo IDs. We are scanned both in and out, daily. Where to begin? Even checking one’s coat was daunting–lots of unused hooks because the heavy aluminum numbered tags essential to recover your coat were missing. Half way around the arena, and back before you can even ponder what to do first. Every moment from 8 am to 8 pm and even later, there are multiple events of varying levels of importance with varying levels of access.

Parties– Nation reps who actually negotiate and their staffs–wear pink badges; Secretariat staff wear blue and over five thousand Non-Governmental Organizations (NGO) observers, like me, wear gold badges. Media wear orange badges and have even less access than I. The Opening Plenary required a ticket in addition to ID. But there were only a limited number of tickets for NGOs, available only through a “Constituency”.

While I sort of wish I had found this guide earlier, I don’t think it would have made much sense until today. Not only am I newbie here, but Rotary is too, and doesn’t seem to fit into any of these formal groups. Alas, at this time Rotary has no ‘Constituency’, so I had no ticket to the ‘High Level Opening Plenary.’

I wandered into an “Informal” Meeting Room 25, with a huge rectangle of tables, where several dozen Party representatives, each with a pink badge and a laptop, were seated. Each speaker began with ritualized civility, befitting their opaque mission: ‘Review of the work of the improved forum on the impact of implementation of response measures.’ Speakers upended their table tents to be recognized. Words I thought I knew had unique and special meanings, often unrelated to commonsense usage. I scribbled phrases, without much understanding.

Had the Parties met the document of work program mandate? The parties couldn’t agree on what baseline applied, how to measure progress against it, whether assessments should be qualitative or quantitative. Those who hadn’t performed, including the US, argued their omissions weren’t a problem, because the undone tasks weren’t mandates, merely POSSIBLE recommendations. Is it possible that this process will eventually lead to reducing enough carbon emissions to keep the world from warming more than 1.5ºC?

A kind Canadian Party at the table helped me to find the document which set the ‘baseline’ at issue. I shared the tidbit that a bipartisan bill to price carbon and rebate the proceeds to households equally had been introduced in the US House of representatives Nov. 27, 2018. He seemed encouraged to learn about HR 7173-The Energy Innovation and Carbon Dividend Act. We had traded the currency of the day: information.  I felt a little less adrift.

The next morning, after only three hours of sleep, then waiting at the wrong bus stop, I chose a side event panel discussion about Article 13 of the Paris Accords, Flexibility and Transparency in Climate Reporting. The intermittent hot air blowers, trying to heat uninsulated rooms in plastic-walled tents, drown out the speakers, most of whom have only five minutes. Except for the plenaries, where the high-level parties can have one of 6 official languages simultaneously translated, most sessions are in English — sort of.  By the time you have deciphered one speaker’s accent, it’s the next presenter’s turn. Though the speaker is using English, it is often a third or fourth language for her/him. The intriguing accents come in many flavors, some more transparent than others. This brings me back to the topic of the session: transparency.

In addition to heater noise obscuring their words, the speakers’ slides are generally intensely detailed, in small fonts, with poorly contrasting type and backgrounds, shown on undersized screens. The speakers are deeply schooled, intensely knowledgeable experts in arcane fields. Each one has five minutes to share a year, or possibly a lifetime of research. So, of course, to save time, they speak in acronyms: CEEW, CCCCC (the Caribbean Community Climate Change Centre), PACT, MPGs (it’s not miles per gallon), LDCs, SIDS, (nothing to do with crib death) and ITMOs. In despair, I googled for help: UNFCCC’s Glossary of climate change acronyms and terms—all to ensure that the APA (Ad hoc Working Group on the Paris Agreement) will make progress with ETF.

Eventually I learned why the topic was important. The Paris Accords require monitoring, record keeping and reporting of Greenhouse gas (GHG) emissions and progress in reducing to them, so that it can be determined whether and how close each nation is to meeting its Nationally Defined Contribution (NDC) the amount of emissions that it has voluntarily agreed to reduce.

Some developing countries don’t have the capacity to do what needs done, lacking robust domestic air quality control programs, which most developed countries enjoy. Some aren’t sure what to do and how to do it, and some prefer relying on the first two excuses. Countries that can’t or won’t monitor and report want flexibility in how strict the compliance requirements are. If you can’t/don’t measure pollution, you can’t control it, so success in reductions requires transparency in what you have actually monitored and reported.

After 90 minutes of struggle, my frustration boiled over. “WT__ is ETF?” The reply: Enhanced Transparency Framework. Really? I couldn’t suppress a maniacal laugh. If Transparency were the goal, I suggested they begin with – legible slides and an effort to either avoid or translate acronyms. Perhaps I lack the patience and diplomacy for this work . . .

The learning curve is steep and the stakes are high. 1.5º is a daunting target and our collective inaction for the last 30 years has severely compressed the time frame. Pressure from Civil Society —that’s us—might focus the attention of the Parties, as they argue for hours over the nuance of a single word.

Each Rotary Club’s Constitution states in Article 16, Community, National and International Affairs that “the merits of any public question involving the general welfare of the community, the nation, and the world are of concern to the members of this club and shall be proper subjects of fair and informed study and discussion at a club meeting for the enlightenment of its members in forming their individual opinions.” As Rotarians we are charged to be concerned for the “general welfare . . . of the world.”

The Parties seem to be waiting for a groundswell of public pressure to compel an agreement that will slow the catastrophic warming on the only planet we have. How, today and tomorrow, will you, as an individual Rotarian, share the urgency of slowing carbon emissions?

Rotary International is sending an observer delegate to the UNFCCC (The United Nations Framework Convention on Climate Change) climate talks in Poland, COP 24, the first time Rotary International will have a representative at this important world forum.

“I am both deeply honored and a bit nervous to be Rotary’s first observer delegate to the UN Climate talks, which are being held during COP24, Katowice, Poland, Dec. 2-14, 2018. By observing and reporting back, I hope to increase Rotarians’ understanding of the opportunities and risks of climate change and how we may engage to offer solutions.”
Karen Kendrick-Hands, Co-Founder and Immediate Past Chair of ESRAG,
RC Madison, WI USA, D 6250