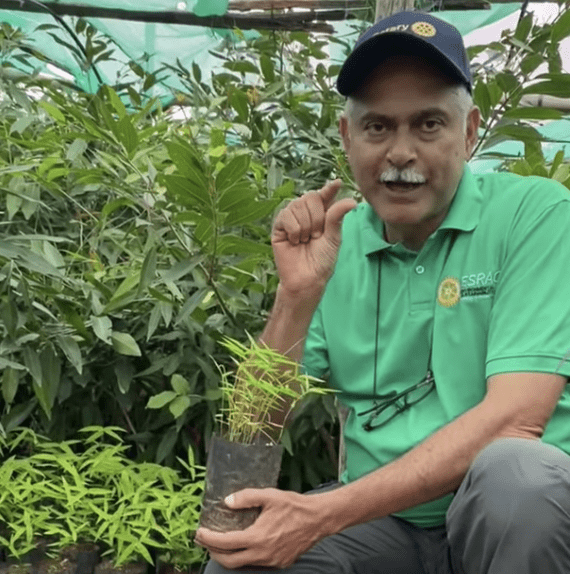 An extraordinary flowering of Bambusa bambos, an indigenous species of bamboo.

Rotarian CR Hanumanth was driving east from Mysore through a forest last February when he noticed an extraordinary flowering of Bambusa bambos, an indigenous species of bamboo. This only happens every 35-40 years. There’s no way to predict when the stands in a particular forest will bloom, and he realized immediately that this was a huge opportunity to combine carbon capture, resilience, and economic opportunity for the region. These bamboo seeds are only viable for nine months, so speed was essential.

Hanumanth, a member of the Rotary Club of Mysore West, is Restoration Chair for ESRAG’s South Asia Chapter. His non-profit, Junglescapes, has built vital partnerships with tribal communities, working together to restore habitat in 1,500 hectares of the Bandipur Tiger Reserve. He reached out to the tribal network and the Karnataka Forest Department, and they went to work, harvesting around three tons of seeds to sell, bringing in much-needed income for their families in the midst of the economic disaster of the pandemic. Each kilo contains about 80,000 seeds. If even 10% of these germinate and survive, that’s almost ten million saplings.

Hanumanth was able to buy a third of the seeds for Rotary clubs. Through the good offices of the South Asia Chair of ESRAG, Rtn Meenakshi Venkatraman, a national workshop was arranged. Hanumanth posted a short, captivating video on how to plant the bamboo seeds. The webinar drew 450 people, and he was able to send seeds to Rotary Clubs across India. It’s a beautiful example of the capacity of Rotary networks to implement effective wide-scale solutions. He owes the success of the bamboo campaign to the Chair, PDG Rtn Ajay Gupta and members of India’s National Environment Committee.

By noticing the flowering and organizing the harvest and distribution of seed, Hanumanth seized a generational opportunity to reverse environmental disaster. Two invasive species have spread to dominate more and more of the region’s forests, disrupting the normal ecology of soil microbes and leaf litter, and leading to a severe compaction of the soil so that it can’t absorb and retain water as it should. In addition to biodiversity loss, this has caused a terrible cycle of flood and drought, endangering watersheds.

All you need to plant Bambusa bambos is a stick to poke a hole and your fingers to drop in a pinch of seed and close the hole. The seed germinates within a few days during the monsoon. Unlike trees, these saplings don’t require any further attention – a great relief, when you’re dealing with millions of them. After 3-4 years one can start cutting the culms, for use in furniture, handicrafts, and even in industry; and the plant will keep regenerating over its 40-year life cycle. It has a tremendous capacity to store carbon, retain water in the soil, and prevent erosion.

Equally important, Hanumanth is helping local people to notice and reverse what had been an invisible disaster. The invasive plants are lush and colorful, and people didn’t understand their connection with floods or landslides. Hanumanth is an engineer. I asked him how he noticed what was happening to the forest ecology.

“Since I was a child, I have always loved being out in nature,” he replied. “As we walked in the forests, my family and I began to notice that the sounds of birdsong had diminished, and more and more of the flowers were the same color. We wanted to find out why, and that’s when we discovered the problem of invasive species and habitat loss.” Thank goodness that Hanumanth kept his eyes open, and is so successful in opening other people’s so they can act before it’s too late!