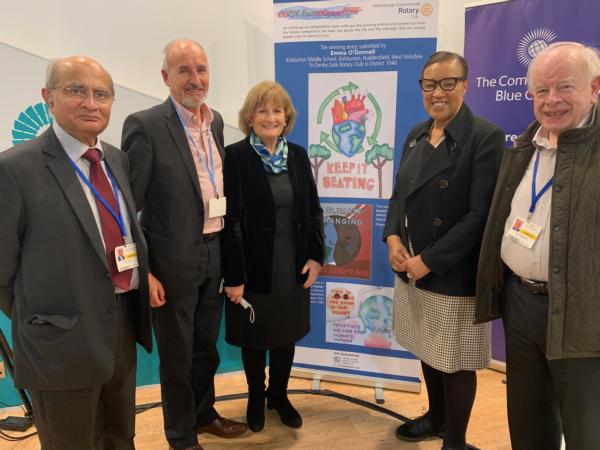 Children’s creative solutions, exhibited at COP26, as well as at Glasgow Airport and hotels, brought an extra dimension to the climate debate.

Children’s concerns over the world’s global warming challenge were unveiled to political leaders and climate experts at COP26 on Friday 5 November by the Rotary organisers of a competition open to students aged 10-12. The best of nearly 4,000 hand-drawn posters from primary schools across the UK were shown as part of a Commonwealth Blue Charter focus on how young people view the environmental crisis.

Children’s creative solutions, exhibited at COP26, as well as at Glasgow Airport and hotels, brought an extra dimension to the climate debate, said Commonwealth Secretary General Baroness Scotland. She said that the winning poster depicting a heart showing valves belching out smoke depicted an “absolutely powerful message to keep it beating.” Baroness Scotland commended the competition, run through Rotary clubs, as a superb way to involve young people in tackling the challenge. “It is a critical moment. We are all charged on an indictment.”

The Baroness took part in a live discussion with young children from Ewell Castle School in Surrey, as well as schools from Nigeria and Malta. She praised them as “the new climate warriors who are so engaged”. “None of us can do this on our own,” she told them, “but if we come together and think about positive things we can do, we are on our way.”

Judith Diment, MBE, Dean of Rotary Representatives to the UN, announced the winners at the Commonwealth Youth and Public Empowerment Day at the Commonwealth Pavilion. “Rotary believes in developing the next generation of leaders,” she said. “Our Interact and Rotaract Club programs help younger leaders build leadership skills, expand education and learn about the world through service projects.”

As we are all aware, our actions today will have a lasting legacy on our children and grandchildren. Rotary’s Mitigating Climate Change poster competition offered an unparalleled opportunity for children to engage in an initiative which highlights the key issues of climate change and the action that should be taken to protect their world for future generations. These posters send their messages on what they want the people of the world to do to make it a better and safer place for their generation. The quality of entries was outstanding and the winning entries have received much praise.

The competition helped raise awareness in schools of the issues of climate change and the discussions taking place at COP26, and enabled primary school children to be part of it. It also gives COP26 delegates an opportunity to see children’s views on climate change. Decisions taken here in Glasgow this week will have a lasting impact in the future for these children.

Doug Wills is Rotary International’s Representative to the Commonwealth and a member of RI’s first official delegation to a UN Climate Conference. He is Editor Emeritus of the Evening Standard and The Independent.

← Wake Up Call COP26 First Week: Promises Made in the Blue Zone →