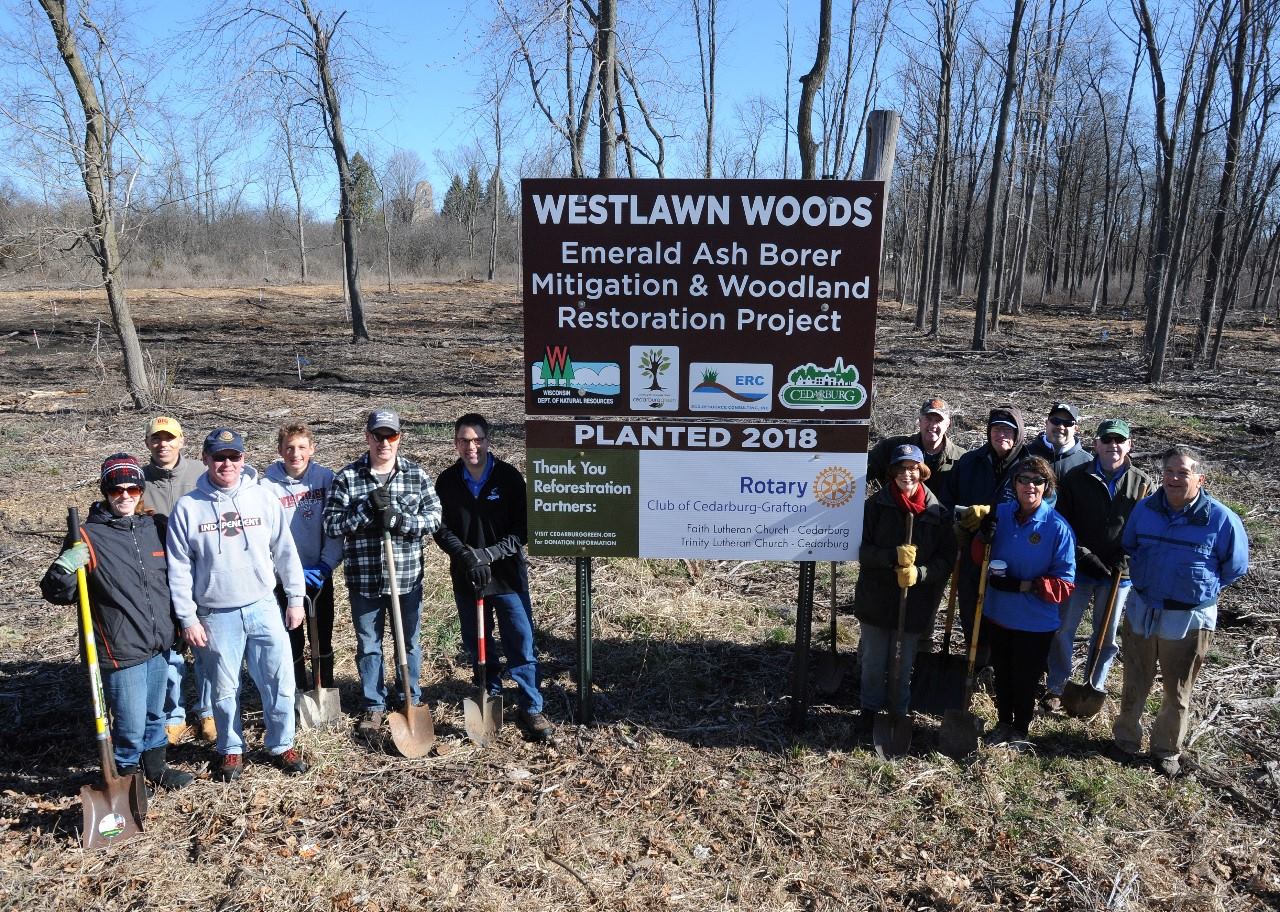 Green Bay, Wis – On Tuesday, Feb. 19, 2019, Rotary International District 6270 received the Project Partnership Award from the Wisconsin Urban Forestry Council.  The award, which  was presented at the 2019 Wisconsin Arborist Association/DNR Urban Forestry Conference recognized D 6270 for an extraordinary partnership between local Rotary Clubs, and municipalities, other service organizations, and citizens in planting trees. Jeffrey Reed, 2017-18 DG of D 6270 and member of Fond du Lac Morning Rotary Club; Connie Pukaite, former Mayor of Mequon, leader in creating Mequon’s Rotary Park, and a past Director of the Wisconsin DNR, of the Mequon-Thiensville Sunrise Rotary Club received the award on behalf of Rotary District 6270.

The 2017-18 Rotary International President Ian Riseley stimulated the project by challenging through his 1.2 million tree challenge, He challenged each of the 35,000 Rotary Clubs in the world to Make a Difference by planting at least one tree for each of its Rotary Members during the Rotary Year. Rotarians in southeast Wisconsin District 6270, responded by exceeding the goal of planting 2,800 trees – they planted nearly 6,800 trees in parks and woods, on school grounds, in nature preserves, in city squares, along hiking and biking trails, in arboretums and retirement communities.  They contributed more than 3,000 service hours, and invested over $162,000 in community trees during the 2017-18 Rotary Year. With the assistance of Wisconsin Rotarians, some trees were even planted by Rotarians in Haiti and Tanzania. World-wide, Rotarians were Making a Difference by planting over 4.7 million trees.

Riseley noted, “Environmental degradation and global climate change are serious threats to everyone. They are having a disproportionate impact on those who are most vulnerable, those to whom Rotary has the greatest responsibility. … The time is long past when environmental sustainability can be dismissed as not Rotary’s concern. It is, and must be, everyone’s concern.”  Riseley also suggested, “There’s something about planting a tree that speaks to people in a very primal way. It shows a long-term commitment to the community.  … somehow, planting a tree captures the imagination.”

Kristin Gies, Urban Forestry Council Awards Committee Chair and Executive Director of the Mequon Nature Preserve commented, “My nature preserve benefitted from the involvement of over 50 people who planted more than 200 mature trees.  The Urban Forestry Council Awards Selection Committee was impressed with the impact created by this one organization, Rotary International, planting trees in Wisconsin and around the globe.”

Jordan Skiff, Chair of the Urban Forestry Council and Fond du Lac Director of Public Works commented, “Due to the partnership of Rotary Clubs – raising funds, recruiting other partners, organizing and volunteering their time to plant trees – the city’s urban forest has more trees and increased diversity than it would have otherwise.  In my own community of Fond du Lac, City Arborist Brian Weed and Parks Superintendent John Redmond, worked closely with Rotary and other partners to manage an emerald ash borer infestation.”

Said PDG Reed, “It was exciting that so many Rotary Clubs in Wisconsin responded so positively to this initiative and engaged so many partners.  There was great enthusiasm among many Rotarians for the environment through tree planting.  We thank our many partners, such as the Urban Foresters at the Wisconsin Department of Natural Resources who provided assistance.  We greatly appreciate recognition from the Wisconsin Urban Forestry Council.   And, we welcome others to join Rotary in caring for the environment.” 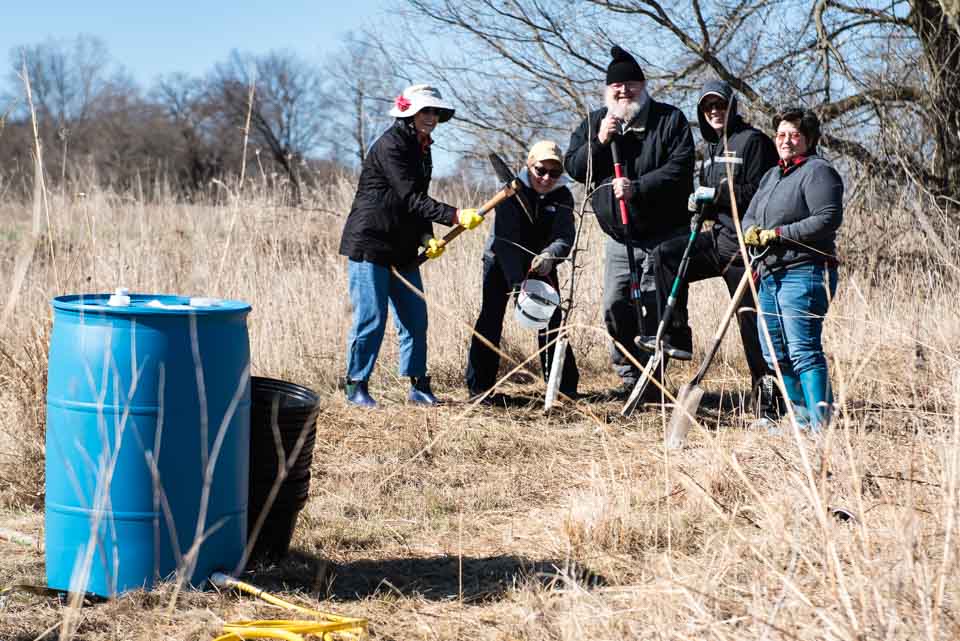 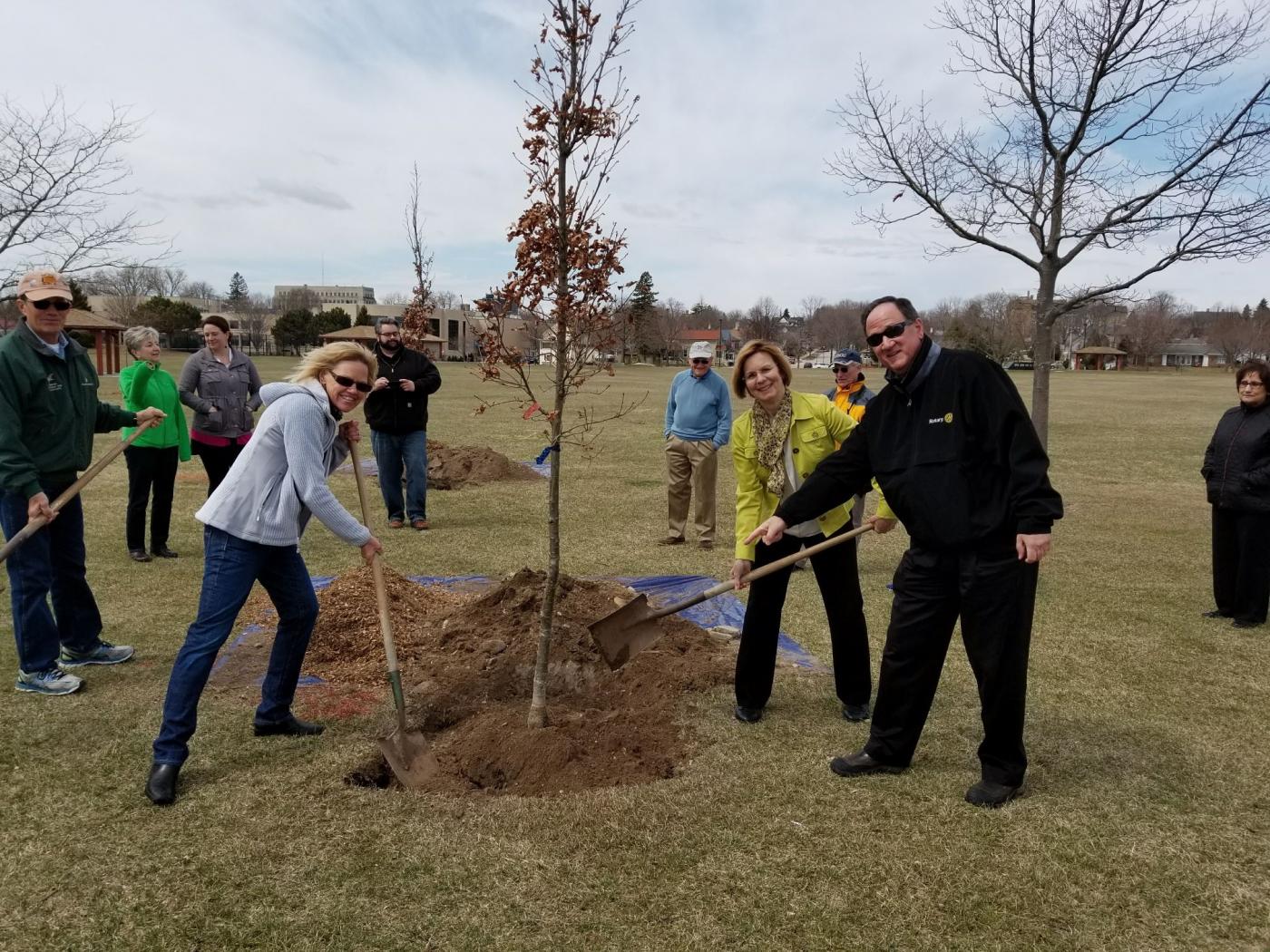